Project OverviewThe Elgin O'Hare Western Access (EOWA) Project has the potential to change the face of Illinois’ northwest suburbs, the Midwest region and beyond. Due to the overall magnitude of the project and potential to dramatically improve mobility, freight connectivity and enhance the national and regional economies, the EOWA Project is considered a Project of National and Regional Significance by the U.S. Department of Transportation.The EOWA Project includes construction of a new, all-electronic toll road around the western border of O'Hare International Airport linking the Jane Addams Memorial Tollway (I-90) and the Tri-State Tollway (I-294), the extension of the Elgin O'Hare Expressway east along Thorndale Avenue to O'Hare and the rehabilitation and widening of the existing Elgin O'Hare Expressway. The 2013-2025 construction plan is broadly supported by local governments and represents a fiscally responsible approach to address the area's diverse travel needs - improving travel efficiency, providing western access to O'Hare, enhancing multi-modal connections and reducing congestion.Itasca Map & TimelineVideo Overview of Project 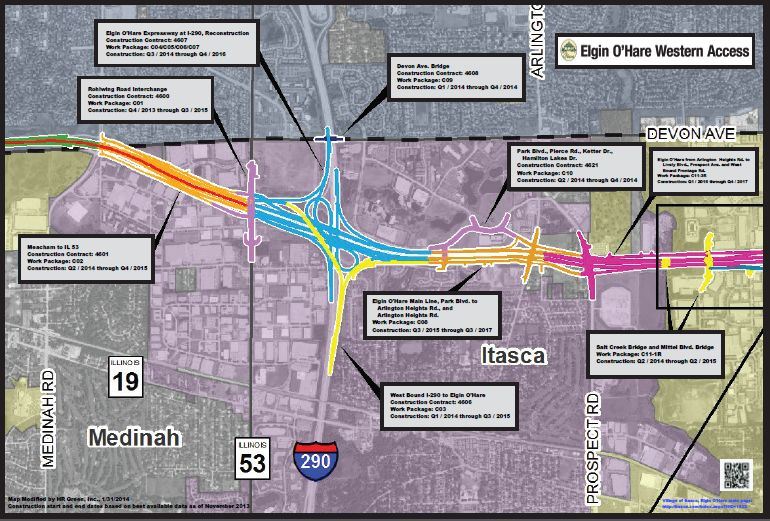 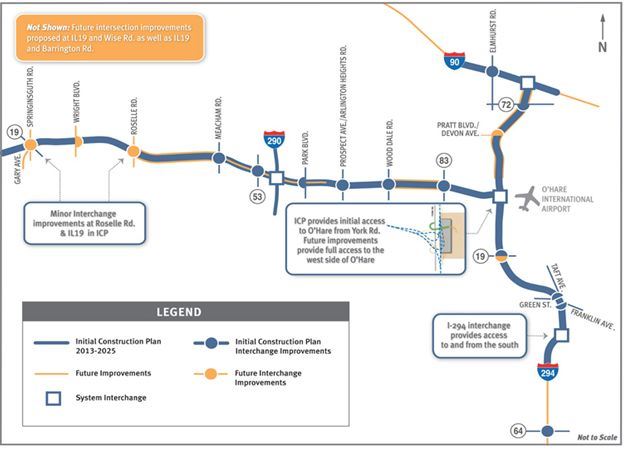 As part of its 15-year, $12 billion capital program, Move Illinois: The Illinois Tollway Driving the Future, the Illinois Tollway has committed $3.1 billion toward the $3.4 billion needed to begin building the EOWA Project as soon as 2013.

Funding sources to close the remaining $300 million gap have yet to be determined. DuPage County and local officials are working with state and federal officials and the Tollway to identify additional funding sources.

Construction of the EOWA Project could began in 2013 with major early milestones consisting of:

As part of the EOWA Project, the Illinois Tollway has created a Local Advisory Committee to provide input and help guide construction of the EOWA through 2025.Guidelines approved by the Tollway’s Board of Directors call for the Local Advisory Committee to work with the Illinois Tollway and the Illinois Department of Transportation (IDOT) to address local construction issues, such as noise abatement, landscaping options, property access and use, as well as drainage and utility issues. The committee will also have the option to explore potential interest in community partnerships for aesthetic additions and bike/pedestrian enhancements, as well as sustainability initiatives and economic development opportunities for the corridor as a whole.

Each of the 19 communities and townships along the EOWA Project corridor was asked to designate a member on the committee. In addition, both Cook and DuPage counties have designated a representative to serve as a special liaison to the committee.