Hundreds of people attended the series of ribbon cuttings and festivities on Saturday, Sept. 25, 2010, to officially open the Salt Creek Greenway Trail.

Fred Maier, Environmental Services Coordinator for Itasca, said: “We are very excited to see the completion of this wonderful addition to the regional bike trail system. Along with the Salt Creek Greenway Trail connecting people to communities along Salt Creek, it also provides cyclists with connections to the growing network of trails throughout the area.” 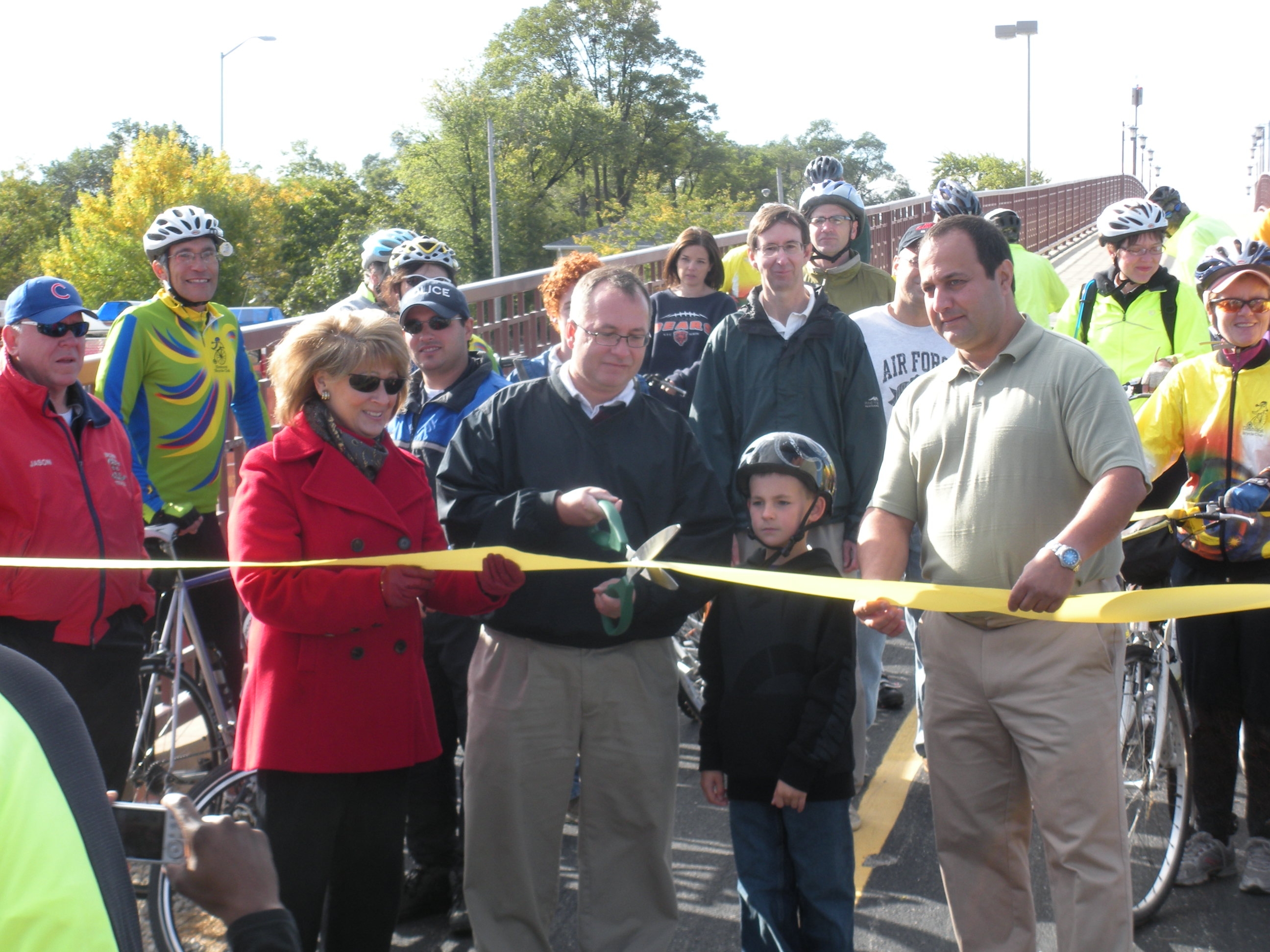 The agencies that worked together to create the trail also hosted the festivities, which began at 8 a.m. in Busse Woods.

The Elmhurst Bike Club made an inaugural ride from the beginning of the trail on the north through each of the communities to the end of the trail near Brookfield Zoo.

The Village of Itasca and the City of Wood Dale hosted the ribbon cutting ceremonies at 9 a.m. at the Target parking lot, 401 W. Irving Park Road, Wood Dale. State Senator Carole Pankau and State Representative Dennis Reboletti were on hand to say a few words and to help cut the ribbon.

There was a bike rodeo and other activities for families to enjoy. Itasca Police Officer Tom Poulakidas represented the Village in the rodeo, setting the times to beat in each of the competitions. Two dozen children tried to “Beat the Cop” in tests of speed and bike handling skill.

Project History
The original regional Salt Creek Greenway Trail concept involved 12 agencies, and was 1st advanced at a series of meetings beginning in February 1994. The Elmhurst Park District’s Board of Commissioners approved an intergovernmental agreement to build a regional trail in April 1997. An amended agreement was approved by 9 agencies in February 1998. An engineering agreement between the 9 partner agencies and BRW Inc. was signed in spring 1998 and approved by the Illinois Department of Transportation in summer 1998.

Funding for the project was a combination of grants such as Congestion Mitigation and Air Quality Improvement, Surface Transportation Program, Illinois Department of Natural Resources, plus a local share. The original project estimate was $7.7 million, with 20%, or $1.5 million, being local cost participation.

In accordance with grant requirements, the trail was built to national bicycle trail standards developed by the American Association of State Highway and Transportation Officials. These standards address all bicycle trail design considerations, including: separation between bike paths and roadways, width and clearance, design speed, grade and alignment, sight distance, intersections, signs and marking, drainage, pavement structure, and types of use.

The Salt Creek Greenway Trail is a key link in the development of a 210-mile integrated trail network in northeast Illinois because it connects 2 systems, the Illinois Prairie Path (59 miles) and the Centennial Trail (20 miles) which run roughly parallel to each other. The 210-mile system also includes:
With the development of the Salt Creek Greenway Trail, residents of significant portions of DuPage and Cook counties can access this network.

Project Details
The Salt Creek Greenway Trail is a 32-mile-long, regional pedestrian/bicycle trail that extends from Busse Woods in Schaumburg to Brookfield Zoo, in Brookfield.

The trail extends through 12 communities with a combined population of 300,000 residents and connects directly to the following: